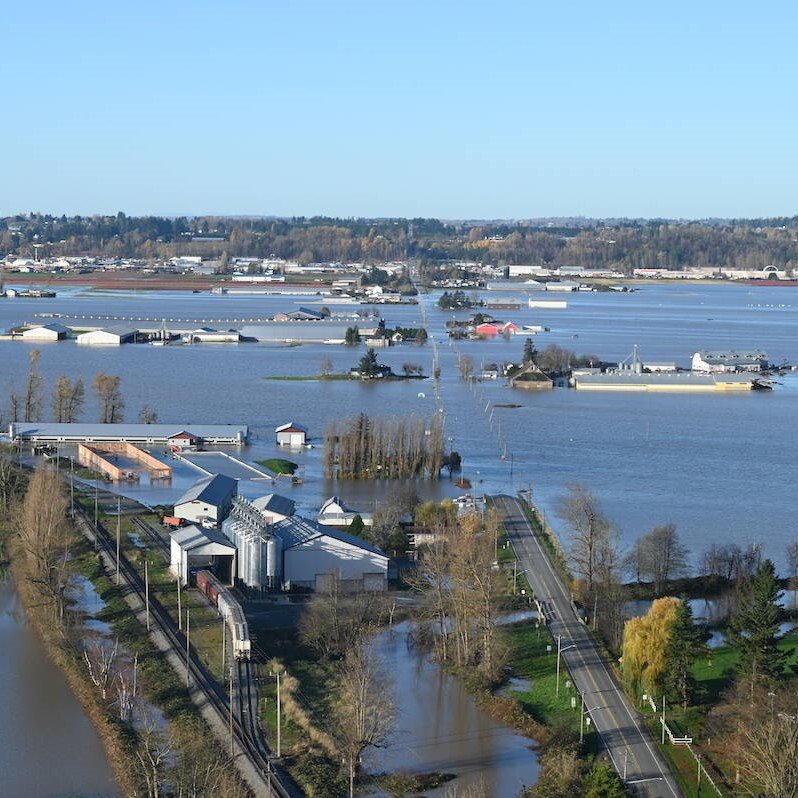 November 14, 2022, marks the one-year anniversary of the start of the extraordinary two-day rainstorm that pushed the Nooksack River through its banks and caused flooding across the Fraser Valley. Over 3,300 people were evacuated from their homes during the disaster. Farms, businesses, and infrastructure were heavily damaged or destroyed completely.

In the immediate aftermath, the Abbotsford Disaster Relief Fund (ADRF) was jointly established by the Abbotsford Chamber of Commerce (ACOC), the Abbotsford Community Foundation (ACF), and the University of the Fraser Valley (UFV). This coalition has raised a total of $4.44 million from over 6,100 individual donations.

Fundraising began within two days of the flood. The ADRF set up an online hub and thanks to local and national media coverage, donations started pouring in ― one every 20 seconds. Generosity came in amounts from $5 from individuals, to corporate donations of $512,000. Support rolled in from across Canada and as far away as Australia and Taiwan. In the first two weeks, the ADRF raised over $1.5 million to help those impacted.

Eighty percent of the total funding donated, or $3.5 million, has been distributed; with nearly $2 million of that total directly administered to local farmers and businesses, and the remaining amount distributed to front line grass-roots organizations who have helped people most impacted by the flood.

Milt Walker, who led aid distribution at Gateway Church in Abbotsford, says the money from the fund helped community members kick-start their recovery. “We recognized that when people rebuilt their homes, they were going to have to buy furniture and new appliances,” said Walker, whose organization also used the money to help victims replace vital tools, equipment, and structures. “We made an appeal to the Abbotsford Disaster Relief Fund, and they were there within a matter of days to support us.”

“The destruction the storm brought to our Abbotsford community, especially to our farmers and their land, was devastating,” said Anita Nielsen, Executive Director, Advancement at UFV. “It was incredibly moving and inspiring to watch our community come together so quickly to support each other through this dark period. As a coalition, we felt it was vital to provide immediate financial aid to flood victims while working alongside other community partners to assess and address the longer-term impact.”

“I’m most proud of the speed the partners of the fund coalition displayed in pulling it together and being nimble in terms of how we were able to respond to the crisis, raise the money, and target those most in need,” said Katerina Anastasiadis, CEO of the Abbotsford Chamber. “It was important that people had access to funds in a quick manner and since the disaster hit, many farmers have still not yet received government assistance.”

So far, the fund has disbursed grants to more than 20 not-for-profit organizations, to over 200 businesses and farms, and to over 100 individuals and families who lost personal belongings. The ADRF responded as the flood waters were receding and during the immediate and medium-term aftermath, but the fund is also designed to offer support in the longer recovery horizon. The remaining 20 percent of funds donated is available to help those still being impacted. Charities can continue to apply for funding through the ADRF portals at ACF.

“The catastrophic nature of the flood affected thousands of people and caused billions of dollars in damage,” said Wendy Neufeld, ACF Executive Director. “We raised a small fraction of the losses incurred, but through strategic partnerships we were able to help hundreds of affected Sumas Prairie residents within a short period of time, sometimes with the first financial aid they had received after devastating loss.”

Alison Arends, the owner of Crossroads Dairy Farm in Abbotsford, used funds from the ADRF to help distribute space heaters, blankets, clothes, and diapers from a massive storage unit on her farm. She allowed farmers to temporarily move their cows to her property and served hot lunches for up to 100 people daily.

“There was a lot of activity and a lot of different hired hands helping around the clock,” said Arends, who accessed two grants from the Chamber stream and one through the Gateway Church. “Even though things have improved, there is still a lot of clean-up to do and the situation is still not very good for many people.”

While the cumulative cost of the damage in Abbotsford exceeds the ADRF’s resources, there is funding still available for flood victims. One year after the tragedy, the organizers continue to help rebuild the community while recalling the fund’s initial impact in the local recovery.

“Small grants to farmers and businesses in the early days following the flood was some of the first financial help they received and gave them hope that they would recover,” Neufeld said. “We were able to adjust our systems and processes to respond to the high volume of donations and I am very proud of coalition staff and volunteers who helped us get this volume processed and tax receipts issued on a timely basis with very limited resources. We all worked extremely hard for the good of our community – that’s what this effort was all about.”

To celebrate those who donated to the fund, UFV hosted an ADRF Donor Appreciation Event on National Philanthropy Day on November 15th. This event celebrated the generosity and spirit of community during a challenging time for many. At the special gathering, donors heard first hand about how the funds were used to support the community by Alison Arends from Crossroads Dairy Farm, and Milt Walker, from Gateway Community Church. The philanthropy and support of flood victim’s recovery, in the total of $4.44 million, was truly amazing and this event allowed the coalition to thank the donors who have made a difference for many impacted by the floods.

In the spring of 2018, we were pleased to provide Greater Vancouver Youth Unlimited with a Smart and Caring Community...
Grants & Funding, Stories of Impact

“What brought us together was a disaster, a loss, a trauma, something we can never forget.” With those words, Mark...
Return to Blog
All Grants & Funding