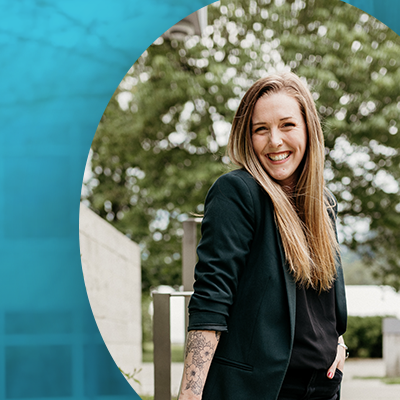 From an early age, Jessica Levesque knew she wanted to be an entrepreneur and put her creativity to the test. As a high school student, she excelled in courses like woodwork, metalwork, automotive technology, and graphic production, as well as English and communications. She also enjoyed the community aspect of school, organizing classmate events, such as graduation celebrations. Although she did well in high school, she recalls the many challenges she faced around her mental health. Looking back, Jessica remembers the anxiety and depression she regularly grappled with. Despite these challenges and struggling to advocate for herself at a young age, she completed her grade 12 year at W.J. Mouat Secondary High School in June 2012 and was off to convocation where she graduated with a bi-lingual Double Dogwood Diploma in both English and French.

When she thinks back to her convocation ceremony, she remembers the excitement and joy of the day. Jessica was pleasantly surprised to hear that she won the 2012 W.J. Mouat Grad award through the Abbotsford Community Foundation Student Awards Program. It was a special moment for her, winning the award in front of her family. She knew she wanted to use the award to attend a post-secondary program that would help her develop the skills needed to be an entrepreneur and own a business one day, where she could use her creativity and hands-on skills. These early experiences and dreams paved the way for many other endeavours she would pursue later.

After high school, she dove right into post-secondary studies at the University of the Fraser Valley, enrolling in the Bachelor of Business Administration (BBA) program. She quickly felt that she wanted to pause her studies to ensure she was on the right educational path, ensuring she was in the right program after seeing her older sister change educational fields partway through her studies. After taking a break and working to save money for tuition, she returned to her studies about a year later and continued taking introductory BBA courses. At the same time, she worked closely with a UFV career counsellor to ensure she was spending her time and money on the right program. She reaffirmed that the business program was the right fit for her.

This was also when she decided she wanted to get more involved and gain valuable experiences that would help her expand her resume. This led her to apply to UFV’s Co-operative Education program. After being accepted into the program, she quickly landed a placement with YVR in their marketing and communications department. After completing her cooperative work term, she started her own woodworking company. It all started when she built herself a wooden blanket ladder by hand and posted her creation to Facebook. Soon, she had received over 50 order requests and before she knew it, she was building countless blanket ladders and other custom wooden decor pieces in her apartment living room. As her company grew, she purchased more and more tools and acquired a large shop space to accommodate the demand.  Jessica soon hit a crossroads with her business, realizing it had gotten so big that she was forced to decide between school or continuing to grow her business. She made the tough decision to close her business and continue her education.

A short while later, while continuing her courses, she began working as the events assistant at UFV’s Student Union Society (UFVSUS). She recognized that the organization was highly impactful, but needed improvement, specifically as it related to policies and procedures and its working relationship with UFV’s administration. She wanted to be at the table, helping make decisions and representing the UFVSUS. This is a primary reason why she ran for UFVSUS President and was later successfully elected to represent UFV’s student body.

In total, she worked for UFVSUS for roughly 5 years. When she reflects on this time, she’s proud that she enhanced relationships with UFV’s administration despite the pandemic beginning at the same time she stepped into the president role. Starting her presidency during a pandemic was not how she envisioned the role, but she recognized that this was a crucial time for her to advocate for student needs. She played a key role in advocating for the credit/no credit option, which allowed students to take a credit notation on their transcript rather than a letter grade, given many were struggling to adapt to the new normal. She’s also proud that she was able to establish a new Intercampus shuttle bus contract in a short turn around period once the announcement was made that classes would be returning to in-person sessions. Another highlight of her time with the UFVSUS was when she spearheaded SUS’s Wellness Week, which aimed to highlight the many available services for students on campus.

Despite her success in representing the UFVSUS, she continued to struggle with anxiety and depression during her studies. She recognized part way through her degree that she could greatly benefit from additional support, which is why she connected with UFV’s Centre for Accessibility Services (CAS). Through their services, she received the support needed to improve her grades and feel more confident in her studies after being registered as a student with a disability. This allowed her to write tests in a different environment with additional time. After receiving these supports, her grades skyrocketed. This is why she felt a sense of responsibility to share her experiences and the support services available to other students through her work with the UFVSUS.

Overall, Jessica feels as though her post-secondary experience was incredible and that she got more value than most. Completing her degree over 8 years allowed her to get involved, make great connections, and gain valuable skills while completing courses at the same time. After graduating with a Bachelor of Business Administration specializing in Marketing in June of 2020, she continued her work with the SUS as the Programs and Services Manager for some time. She knew at graduation and after finishing her work with the SUS that she wanted to find a role where she could use the marketing and communication skills she had developed throughout her studies and work experiences while giving back to the community.

Jessica was thrilled at the opportunity to become the campaign manager for the AbbotsfordFIRST Elector’s Society during the 2022 general election. Not only did she get to use these skills, but she continued to grow her connections, but this time outside of UFV. After the municipal election wrapped up and she was looking for a new role, she recalled her conversations with the Abbotsford Chamber of Commerce’s CEO, Katerina Anastasiadis, who was looking to fill the role of Business Engagement Manager. Jessica reached out to Katerina and learned that the position was available. Jessica was thrilled to take on this new opportunity, continuing to develop those community relationships she had gained through her time at UFV and afterwards. This was particularly exciting for Jessica because when she ran her woodworking business many years prior, she was a member of the Abbotsford Chamber of Commerce. She also took a professional selling class at UFV, where the core project was selling Abbotsford Chamber of Commerce Memberships to the local business community. Through these experiences, she has learned firsthand the impact of the Chamber of Commerce and is looking forward to playing a part in that going forward in her new role.

As Jessica looks to the future, she’s excited to continue her work with the Chamber, which allows her to work with local businesses and community partners like the Abbotsford Community Foundation. She’s also looking forward to continuing working on an affordable housing project she has worked on for over 10 years, allowing her to advocate for tiny houses as an alternative and affordable living solution.

As a student award recipient, Jessica’s thankful for the funding she received through the Abbotsford Community Foundation, which allowed her to spend less time working and more time focusing on her studies in the early days. She would like to thank her family, specifically her older sister Melissa, who paved the way for her as the only other person in their family to complete an undergraduate degree, and Michael, her fiancé that supported her through all of the ups and downs of completing her BBA. She would also like to thank faculty members Dr. Jon Thomas, Mark Breedveld, Kim Milnes, and Hannah Celinski, who immensely supported her throughout her post-secondary journey.

To learn more about how we continue to support graduating students through our Student Awards Program, click here.

We live in one of the most generous communities in Canada. Thanks to our community’s generosity, we granted over $3...
Grants & Funding, Stories of Impact

From a young age, it was clear that Cambree Lovesy enjoyed learning, making music, and performing. She can remember as...
Grants & Funding, News & Announcements

November 14, 2022, marks the one-year anniversary of the start of the extraordinary two-day rainstorm that pushed the Nooksack River...
Return to Blog
All Grants & Funding