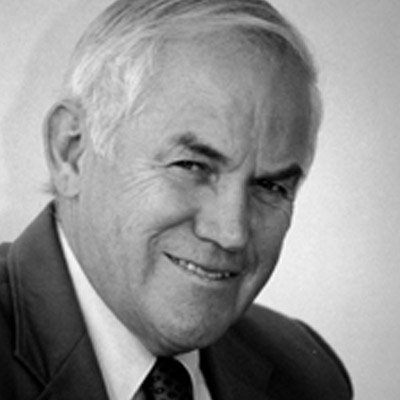 Dave was born March 18, 1930 in rural Saskatchewan. His father was a Lutheran Minister in their small town of Admiral. In 1945, he, his two sisters, and their parents moved to the village of Matsqui, BC. As a teenage boy, Dave was in awe, thinking the mountains were the Garden of Eden!

It was in grade 10, while attending Phillip Sheffield Secondary School that he first started playing basketball with the girls at Matsqui Hall. It was the following year – grade 11 – that he started playing basketball with the men returning from the war. Spud Murphy, Phil Hadden, Roy Griffith and the Kerr brothers were young men who all bonded to become lifelong friends.

By the time he graduated high school in 1949 (in his class of 38 grads) he was offered a partial basketball scholarship to Pacific Lutheran University in Tacoma, WA. It was there he received a Bachelor of Arts, Education, in 1952. He returned home to complete his practicum at Abbotsford Jr High School, then located at Abbotsford Airport military buildings. His sponsoring teacher was Syd Appleby.

Dave credits his brother-in-law, Jack Bates, for his interest in the 442, with Jeff Northcott as the Commanding Officer. He joined the Air Force, sponsored by the Squadron from Vancouver. Officer training for Dave began February, 1953 in London, ON. After that, it was off to Penhold, AB for flying training and then Portage La Prairie, MN for jet training and gunnery training. He graduated with his wings in 1954.

Red Deer, AB was where Dave met his lifelong partner, Ruby. She was the continuity editor at the radio station in 1953 when they started dating. It was a whirlwind romance! It began on a Friday night at a dance in a hangar at Penhold Airport, put on by the Airforce, where her sorority had been invited. He was immediately attracted to her! It didn’t take long for him to call Ruby for a coffee date. They surprised his parents by getting married in Red Deer, a short four months after they met, and having a so-called honeymoon in Abbotsford in January (1954) when the weather was very cold. There was a chilly North East’r storm rolling through and the cold and snow were not a very good first impression of Abbotsford for Ruby!

Despite that, they decided to call Abbotsford home. Dave began his teaching career that same year when Syd Appleby, Vice-Principal at Phillip Sheffield, asked Dave to teach at his old alma mater. This was actually against the rules in those days. He taught there for two years and moved over to the new Abbotsford Senior in 1957.

However, there was not enough money in teaching, as the sole provider, for a young, growing family so Dave switched back to a career chasing his first passion: flying. Trans Canada Airlines (now Air Canada) interviewed him in Winnipeg with training commencing in the fall of 1957 in Montreal. He flew the four engine North Star from Vancouver to Winnipeg as his regular route. Dave stayed with Air Canada for 33 years.

Dave has some great stories from his flying days. One such story takes place in 1958 when two Japanese destroyers were entering Vancouver harbour on a friendly visit. Dave and one of his colleagues decided to stage a mock dogfight over the Georgia Strait. In the middle of their demonstration, their wings clipped. Dave found it necessary to eject from his T-bird: he watched his jet crash, and subsequently sink, into the ocean. He recalls thinking that the Lord didn’t want him yet – he was rescued by a trawler – and he knew there was more to do. He was fined only $50 for his troubles!

During his flying and piloting career, he received an offer from Air Canada to do a regular flight route between Jamaica and New York. The year was 1969. He refused at first but his family put up such a fuss that he agreed to go and they spent 1 ½ years living in Jamaica.

When he and his family returned to Abbotsford from Jamaica in 1971, it was suggested to Dave he put his name forward for School Board. Thus began a long career in local municipal politics as a public servant. He served for as a trustee for seven years, including one year as Provincial School Board Association President. In this role, he travelled all over the province to the various districts meeting a variety of people and learning much about BC.

In 1979, Dave was elected as a Matsqui Councilor and went on to serve on Council for eight years. Dave then made the bold move to run in a by-election for Mayor to replace Harry DeJong. It was during his tenure that the cities of Matsqui and Abbotsford amalgamated, through a referendum. This was a vision for Dave, something he had been very keen on accomplishing.

Dave was part of a group, in the 1990s, which was interested in developing the Abbotsford Airport, then classified as inactive. The group approached the Federal Government and were successful in their pursuit. On January 1, 1997, the Abbotsford Airport was purchased by the City from Transport Canada for a mere $10! The Airport, an international designation, is now an integral part of our community’s success.

The Abbotsford School Board approached Dave in the 1990s to request an elementary school be named in his honour. In recognition of his service to Abbotsford, they felt it would a salute to his commitment to our community. He and his family were humbled by this request, and he consented. Jointly, the City of Abbotsford named the neighbouring local park for Dave. In 2005, Dave received the Order of Abbotsford in recognition of his multiple and significant contributions to the communities of Abbotsford and Matsqui.

Dave has always been active and engaged in physical activity. In April 2010, Dave suffered a stroke while working out at a local gym. While he has been confined to a wheelchair ever since, Dave is still actively engaged in community life.

Dave and his late wife – his love – Ruby have 5 children, 12 grandchildren and 5 great-grandchildren – to date. Dave believes his life really started when he moved to Abbotsford, in 1945, as a young man. Abbotsford is his home.

Your ticket for the: Dave Kandal’s Legacy Story