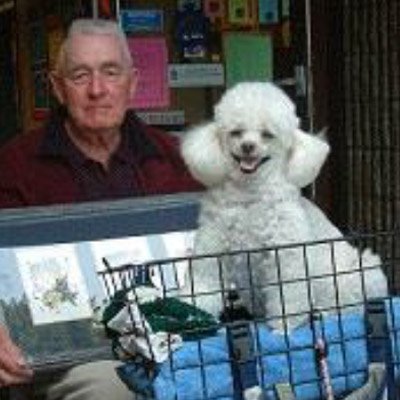 As the undersigned, I, Marie Bercier promise to contribute to the future of the community of Abbotsford through a bequest to the Abbotsford Community Foundation.

Dennis and Marie Carter moved to Abbotsford in 2000, after raising five children in Langley. When Dennis retired from his contracting business, the two travelled and enjoyed their grandchildren. In 1998, Dennis went into the hospital at his doctor’s suggestion to have hip replacement surgery. After the surgery and due to complications, he became wheelchair and oxygen dependent. It was shortly after that time that they got “Muffy”, a small white poodle who immediately took over the household. “Muffy dominated Dennis” said Marie, laughing. They couldn’t stay where they were living in Langley because they had a dog and they also needed a place to park the red scooter that allowed Dennis and Muffy to get outside. They chose to move into Garden Park Towers in Abbotsford which allowed pets and had a place for Dennis’s scooter.

Dennis, who had spent his working life as a successful contractor, wasn’t going to let his disability keep him from being active. He would get outside in his scooter with “Muffy” along for the ride and collect cans and bottles. They were unsure about what to do with the money they received recycling them and were eager to help their new community of Abbotsford. One night Dennis and Marie were watching TV and learned there were children going to bed hungry right here in their newly adopted community. They contacted Abbotsford School District Superintendent Kevin Godden to see how they could help and he suggested supporting the district’s meals program which, in 2000, was serving lunch daily to 450 children in 31 schools during the school year.

With an inspiring purpose for Dennis and Muffy to collect bottles they doubled their efforts. Students at Gordie Howe Middle school and W.J. Mouat would greet Muffy, who enjoyed their pats and attention, every morning as they made their rounds. Once the students knew they were collecting to support the school district’s meal program, they began to collect bottles for them as well. The Mouat football team got involved and inspired others in the community to support the bottle drive. The Eagles built Muffy a special carrier for the scooter so she would have room to move around. The number of bottles and cans collected grew so large they had to have a truck come to the apartment to pick them up. In 2007, CTV reporter Mike McCardell did a feature story about Dennis and Muffy and their fundraising project.

Failing health in 2009 put an end to Dennis and Muffy’s mission. Altogether, they raised over $50,000 and their “bottle drive” was used to establish a $16,000 endowment fund at the Abbotsford Community Foundation. The income is given annually to the school district for it’s lunch program and will do so in perpetuity. Today the school district provides 400 meals during the school year for children in need and this year $847 was donated from the income of the Dennis Carter and Muffy Endowment Fund to support the meals program.

Dennis passed away in 2011. He and Marie had been married for 43 years. In addition to their five children, there are 10 grandchildren, one great grandchild and one on the way, expected on the date that would have been Dennis and Marie’s 50th wedding anniversary. “He was a wonderful man,” Marie said.

Your ticket for the: Dennis Carter’s Legacy Story