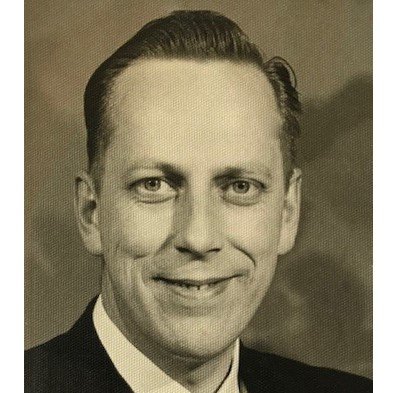 Doug was the younger of two boys born to H. E. (Buster) Taylor and Dorothy Taylor. Doug attended Mount Lehman Elementary School – in fact, five generations of his family have now attended the school, the land for which was donated for that purpose by the family. The Taylor family arrived in BC from Bear River, NS in 1887, and has continuously resided on the family property since that time. Doug was raised on the family farm on Taylor Road in Mount Lehman.

Doug joined the Royal Canadian Air Force at the age of 18 and served in various places in Canada. He was an air frame mechanic, repairing and maintaining aircraft then constructed partly of fabric
and wood.

Doug married Elsie Wall in 1947, and they raised their four children Gordon, Grant, Rosemary, and Douglas Jr. in Mount Lehman.

Doug first started in business, with his brother Jim, establishing a feed warehouse on Ross Road and they had a small general store, gas pump and feed shed just south of Mount Lehman United Church. Later they, with their father, Buster, established “Taylor’s Farm Service”, a general store, in 1945. In 1949, Doug added a General Insurance Agency. Many of the old pioneer families and their descendants were customers, and even then, the Taylor family had known them for several generations. His philosophy in business was that there was no time that was too late or inconvenient for him to help a customer. Serving the community was more important to him than making money. That carried on to his other careers as well, including municipal politics.

Doug was always interested in politics. He was active in the Progressive Conservative Party from the 1940s on and was defeated by Harold Hicks at the nominating convention by only 3 votes. Later, he ran as the provincial Conservative candidate in two provincial elections in the 1960s. After his Dad died in 1966, Doug contested the municipal council seat, which had been held by his father, and became a Matsqui councilor, and later Mayor of Matsqui. During that time, he held many positions including the Chairman of the Matsqui Police Board, a member of the Central Fraser Valley Regional District, and Chairman of the Fraser Valley Library Board. He was responsible, on Council, for the planning of the present Abbotsford Court House and Sevenoaks Shopping Centre, as well as the expansion and construction of the water system which serves the outlying areas of the municipality. He served as Mayor for 8 years, and again as Alderman from 1977-1978 and 1980 – 1981.

Doug loved municipal politics, and there was no job too big or too small for him. One day, he could be greeting Queen Elizabeth on an official visit or installing the Royal Westminster Regiment with the Freedom of the City; the next day he would be out checking a taxpayer’s flooded basement, and later stopping to work at his insurance office, and then when he got home, he would attend to his farm chores.

Mount Lehman greatly benefitted from his work, from finding a permanent home for the Mount Lehman Library, to the setup of the Mount Lehman Fire Hall, where he served as a volunteer fireman, rising to Fire Captain after 14 years of service. Prior to entering municipal politics, he, with his friend, Edwin Olund, developed the Merryfield Ave. subdivision in Mount Lehman, in the days when corner lots sold for $2000.

Doug also served for many years with the Royal Westminster Militia Regiment, where he rose to the rank of Lieutenant. He was also the president of the Red Ensign Club of Canada, an organization formed in opposition to the federal government’s legislation to change Canada’s national flag.

Doug had a vast appetite for local history. People for miles around would come to track down long lost relatives or ask questions about early Mount Lehman history, and he would spend hours researching and answering questions. He also continued to work on the Taylor family history, until in 1995, he tracked down his Nova Scotia relatives. In the summer of 1997, he and Elsie, his son Gordon and daughter-in-law, Sharon, attended a family reunion in Nova Scotia and met 80 relatives previously unknown.

Doug and Elsie were great travelers, with Mexico being their favorite destination – the month before he died they returned from their 71st trip there.

Doug continued, up until the time of his death at age 73, to contribute to the community and to work in his insurance business. In 1997, the Mount Lehman Community Association appointed him to a committee to suggest ideas to improve the rural areas of the district. He had some great new ideas which he was working on at the time of his death.

These are some of the contributions made to our community by Doug Taylor.

Your ticket for the: Doug Taylor’s Legacy Story