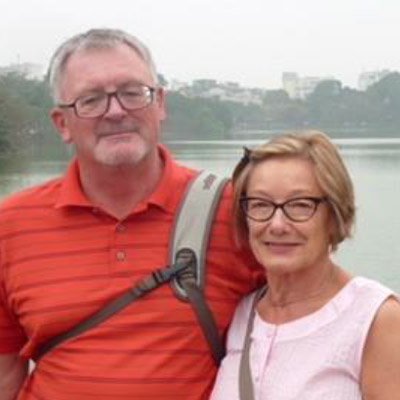 Dr. Lewis Barlett met his wife, Caroline, on an ice rink at the Racquet Club of Victoria in 1969. They were married in 1974, a year after Lewis graduated from the University of Victoria. Lewis then began his medical education at UBC while Caroline worked in the biomedical library.

The couple moved to Abbotsford so Lewis could take a position with Valley Medical Imaging. As a newly graduated radiologist he had skills that supported the new angiography and heart ultrasound services at MSA Hospital.

Lewis was the Chair of the Radiology Department at MSA for seven years and was also the Chair of Radiology for the Fraser East Health Region that included Abbotsford, Mission, Chilliwack and Fraser Canyon. When the new Abbotsford Regional Hospital opened he was Chair of the Department of Medical Imaging until two years prior to his retirement in 2011.

While Lewis was using his skills to help improve health care in the Fraser Valley, Caroline was active in the community through her involvement with the Abbotsford chapter of the BC Medical Association Auxiliary. She brought this chapter to life by working with and recruiting other doctor’s wives to volunteer and raise funds for a number of charities including the annual toy drive for Abbotsford Community Services, the Loving Spoonful, whose work benefits AIDS patients and Abbotsford Hospice Society.

Outside of medicine Lewis was active with a local classic rock band, “No Code Blue”, playing keyboard and doing vocals. The eight-member band’s performance focus was playing at fund raising events. The group broke up after 13 years, however, Lewis and the original band leader have formed a new band to stay active in music.

Lewis and Caroline’s passion for travel started during his medical school days and continued during their years here. This passion hasn’t decreased in retirement as they continue to travel and enjoy their vacation home in Mazatlan.

Lewis and Caroline have chosen to continue their tradition of supporting their community by creating an endowment fund in their estate planning. The income from the fund will support scholarships for high school and university students as well as the ACF Smart and Caring Community Fund, which annually provides grants to local charities in Abbotsford.

“A solid education provided me with the framework for a very successful and fulfilling career. We feel a great deal of gratitude to the people and organizations of the Fraser Valley and believe the best way to express our thanks is through our endowment fund. We are pleased to partner with the Abbotsford Community Foundation to support the educational dreams of Abbotsford students, as well as the ACF Smart and Caring Community Fund,” Dr. Bartlett said.

Your ticket for the: Lewis & Caroline Bartlett’s Legacy Story