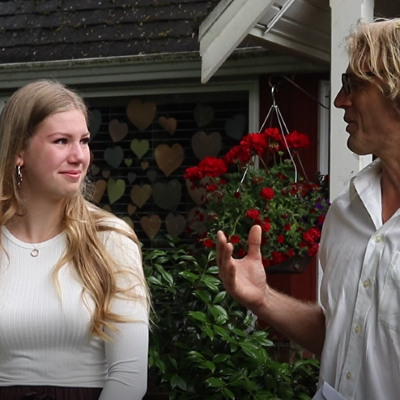 The Abbotsford Community Foundation was honoured to recently present Mackenzie Bell, a local 2020 graduate, with three student awards through our Student Award Program. Family and school representatives were all there on the front lawn of Mackenzie’s home to witness the special moment.

The last award presented to her by her father, and arguably the most sentimental, was the Kari Bell Memorial award in honour of Mackenzie’s late mother. Kari graduated from Yale in 1993 and following in the footsteps of her dad, Don, returned to Yale as a physical education and science teacher from 1998 – 2007. Kari was a beloved member of the Yale family who battled cancer for several years, a fight she took on with the same focus and determination with which she approached every challenge in her life. Kari never complained about her situation and lived life to its fullest while being a devoted and loving mother to her two children and as a best friend to her husband, currently a Yale teacher, Brian Bell. Kari passed away on January 5, 2011. For the past nine years, Brian has attended various graduation convocations to present this award to a deserving graduate. This year, even though the pandemic has affected the traditional convocation ceremony presentations, Brian was able to present the award to his daughter on the front lawn of their family home. Through this award, the family hopes to pass along Kari’s legacy by encouraging students to live a life full of hope and commitment. Who better to carry on Kari’s legacy then her bright and motivated daughter, Mackenzie.

Check out this video to see Mackenzie’s emotional reaction to the award.

Your ticket for the: Local Graduate Receives Three Student Awards Including One In Honour of Her Late Mother